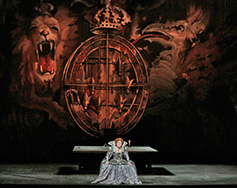 A pseudo-historical opera about Mary, Queen of Scots, and her bitter rivalry with Queen Elizabeth I, Donizetti’s drama thrills with intense stand-offs and impressive vocal displays. Soprano Diana Damrau and mezzo-soprano Jamie Barton square off as two of history’s most formidable monarchs, with Maurizio Benini conducting.

Please join us for a complimentary pre-opera lecture in The Paramount Theater Auditorium at 12:00PM.  The lecture for Maria Stuarda will be conducted by Artistic Director of Victory Hall Opera, Miriam Gordon-Stewart.

Production a gift of The Sybil B. Harrington Endowment Fund

About the Met Live in HD:

In December 2006, The Metropolitan Opera launched The Met Live in HD, a series of performance transmissions shown live in high definition in movie theaters around the world. The series expanded from an initial six transmissions to ten in the 2014-15 season and today reaches more than 2,000 venues in 70 countries across six continents. The Live in HD performances are later also shown on public television, and a number of them have been released on DVD. In partnership with the New York City Department of Education and the Metropolitan Opera Guild, the Met has developed a nationwide program for students to attend Live in HD transmissions for free in their schools.  The Paramount began broadcasting during the 2008-09 season and is pleased to continue to present this series for the community.