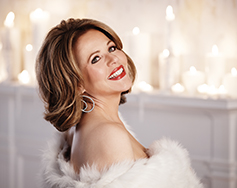 "For sheer beauty of sound, no soprano today can match Renee Fleming." - The Wall Street Journal

“A voice as warm and rich as a fine single malt…” - The Times, London

Superstar soprano Renée Fleming returns to The Paramount with pianist, Gerald Martin Moore in March of 2020. Having conquered the world of opera, in recent years the astonishingly versatile Renée Fleming has appeared on two award-winning film soundtracks and captivated audiences in the acclaimed Broadway revival of Rodgers & Hammerstein's Carousel. Fleming brings the elegance and glamour of the opera house to her intimate—and rare—recital appearances. "Her voice floated across the hall in an iridescent display of vocal color.... By the end of the evening, Fleming held her audience in the palm of her hand" (Los Angeles Times).

Renée Fleming is one of the most acclaimed singers of our time. In 2013, President Obama awarded her America's highest honor for an artist, the National Medal of Arts. She brought her voice to a vast new audience in 2014, as the only classical artist ever to sing the US National Anthem at the Super Bowl. Winner of the 2013 Grammy Award (her fourth) for Best Classical Vocal Solo, Renée has sung for momentous occasions from the Nobel Peace Prize ceremony to the Diamond Jubilee Concert for Queen Elizabeth II at Buckingham Palace.  In 2008 Renée became the first woman in the 125-year history of the Metropolitan Opera to solo headline an opening night gala.

Renée earned a Tony Award nomination for her performance in the 2018 Broadway production of Carousel. Her current and upcoming tour schedule includes concerts in New York, Chicago, London, Amsterdam, Paris, Barcelona, Hong Kong, and Beijing. She is heard on the soundtracks of the 2018 Best Picture Oscar winner The Shape of Water and Three Billboards Outside Ebbing, Missouri, and she provided the singing voice of Roxane, played by Julianne Moore, in the film of the best-selling novel Bel Canto. This summer, Renée will make her London musical theater debut in The Light in the Piazza at Royal Festival Hall.