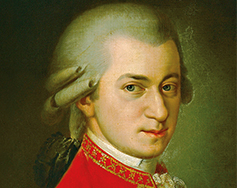 Paramount Presents: In Search of Mozart in HD

Purchase a series of 3 or more In Search Of broadcasts at a time to save 15% on each ticket!

"A model of its kind." - The Independent

In Search of Mozart was produced with the world’s leading orchestras and musician and is told through a 25,000-mile journey along every route Mozart followed. This is a detective story that takes us to the heart of genius. Without resorting to docu-drama or visual re-enactment, In Search of Mozart traces the composer’s life through his music and extensive correspondence. From K1a to K626 (Requiem), over 80 works are featured in chronological order, revealing striking parallels between the music and Mozart’s own experiences. Throughout, it is the music that takes center stage, with the jigsaw of Mozart’s life fitting around it. With rigorous analysis from musicologists and experts such as Jonathan Miller, Cliff Eisen, Nicholas Till, Bayan Northcott, and the late Stanley Sadie, a new, vivid impression of the composer emerges. It dispels the many common myths about Mozart’s genius, health, relationships, death, and character to present a new image very different from Milos Forman’s Amadeus. On its first release the film played in some cinemas for 6 months and remains many people’s – including classical musicians’ – favorite film on Mozart.

More Information on The Great Composers Series:
Join us in celebrating four of the greatest composers (Beethoven, Mozart, Chopin, Haydn), for the exclusive re-release of the critically acclaimed award-winning The Great Composers series, with a worldwide special event cinema screening to mark each of their respective birthdays. Starting on 16th December 2019 with IN SEARCH OF BEETHOVEN and leading up to a special event on Beethoven’s 250th birthday on 16th December 2020 – a screening of the remarkable CONCERTO – A BEETHOVEN JOURNEY. This definitive and much-loved series is not to be missed on the big screen! Beethoven Year 2020 is a major European event.

Paramount Presents: In Search of Mozart in HD