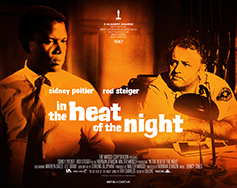 Paramount at the Movies Presents: In the Heat of the Night [NR]

When a wealthy industrialist is found murdered in a small Mississippi town and an African-American man is picked up at the train station with a wallet full of cash, local Police Chief Bill Gillespie immediately assumes he has caught his culprit. He's soon embarrassed to learn that the man he has arrested is Detective Virgil Tibbs, an experienced police officer from Philadelphia who is passing through town and is keen to leave the prejudiced community as soon as possible.

But when Tibbs' superior officer orders him to assist on the case and the victim's widow demands that he lead the investigation, the unlikely pair are forced to work together to unravel the mystery, leading them on a line of inquiry that will challenge both of their preconceptions.

Paramount at the Movies Presents: In the Heat of the Night [NR]