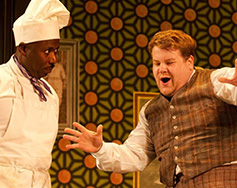 By Richard Bean
Based on 'The Servant of Two Masters' by Carlo Goldoni, with songs by Grant Olding
Run Time: 3 Hours, 15 Minutes (includes a 15-minute intermission)

This screening of One Man, Two Guvnors was originally recorded live at the National Theatre on September 15, 2011.

Always a Paramount audience favorite, by popular demand, we are thrilled to bring James Cordon and this incredible cast of characters back for one night only to The Paramount's Big Screen this September!

Featuring a Tony Award-winning performance from host of The Late Late Show, James Corden, the uproarious One Man, Two Guvnors was a runaway hit both in London’s West End and on Broadway.

Fired from his skiffle band, Francis Henshall becomes minder to Roscoe Crabbe, a small-time East End hood, now in Brighton to collect £6,000 from his fiancée’s dad. But Roscoe is really his sister Rachel posing as her own dead brother, who’s been killed by her boyfriend Stanley Stubbers.

Holed up at The Cricketers’ Arms, the permanently ravenous Francis spots the chance of an extra meal ticket and takes a second job with one Stanley Stubbers, who is hiding from the police and waiting to be re-united with Rachel. To prevent discovery, Francis must keep his two guvnors apart. Simple.

WHAT IS NATIONAL THEATRE LIVE?

With state-of-the-art filming techniques, tailored to every play, we bring you each performance as it happens, in all its glory. From close-ups that capture every flicker of emotion, to sweeping wide shots of the stage.

Whether you come along to the live broadcast, or catch one of many replays, you’ll have the best seats in the house.

And you’ll be part of something much bigger. There’ll be thousands of others all around the world watching along with you. Sharing every gasp, every laugh, every dramatic moment.

This is theatre for everyone.